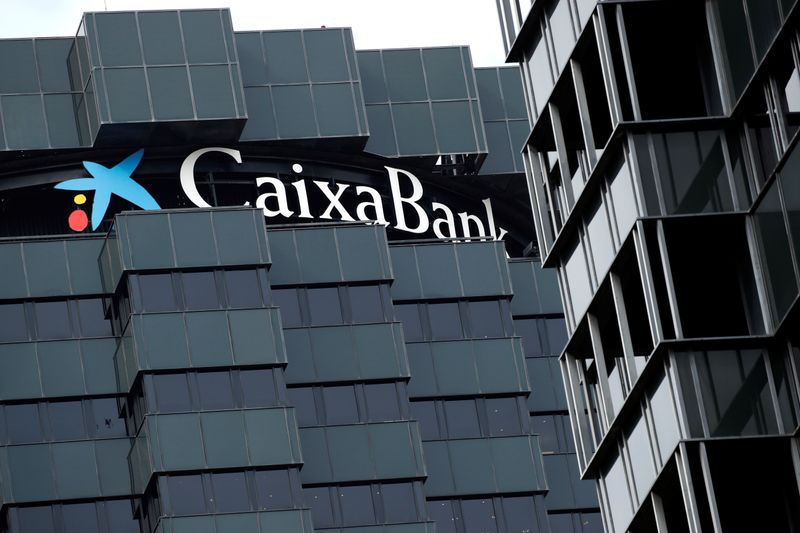 © Reuters. CaixaBank’s logo is seen on top of the company’s headquarters in Barcelona

The banks said in a joint statement on Friday that they expected annual cost synergies of around 770 million euros that will be fully achieved by 2023 and new annual revenues of around 290 million euros over a period of five years.

Lenders will have a combined valuation of more than 16 billion euros, they said.

Banks across Europe are struggling to cope with record low interest rates and the economic downturn sparked by the COVID-19 pandemic, leading analysts to predict more tie-ups to cut costs.

The deal has been described as a merger, but it is in effect a takeover by Caixabank as it is almost three times as big as Bankia in terms of market value and almost two times by assets.

The agreement consists of an exchange ratio of 0.6845 new Caixabank ordinary shares for every Bankia share and includes a 20% premium over the exchange ratio at the closing of September 3, before news first emerged of the deal, the lenders said.

In addition, it represents a premium of 28% over the average exchange ratio of the last three months.

The valuation of Bankia is slightly below the 4.4 billion euros at Thursday’s closing price.

Since news of the merger first emerged, shares in Bankia have risen around 39%, while Caixabank has gained 14%.

Under the terms of the deal, Caixabank shareholders will initially represent 74.2% of the capital of the new entity, and Bankia will hold 25.8%.

Criteria, completely controlled by the foundation of La Caixa, will remain as Caixabank’s main shareholder with around 30% of the combined bank, while the Spanish state will hold through the bail-out fund FROB 16.1%.

Disclaimer: Fusion Media would like to remind you that the data contained in this website is not necessarily real-time nor accurate. All CFDs (stocks, indexes, futures) and Forex prices are not provided by exchanges but rather by market makers, and so prices may not be accurate and may differ from the actual market price, meaning prices are indicative and not appropriate for trading purposes. Therefore Fusion Media doesn`t bear any responsibility for any trading losses you might incur as a result of using this data.

Fusion Media or anyone involved with Fusion Media will not accept any liability for loss or damage as a result of reliance on the information including data, quotes, charts and buy/sell signals contained within this website. Please be fully informed regarding the risks and costs associated with trading the financial markets, it is one of the riskiest investment forms possible.